During the NaPoWriMo challenge on Day 20, we had to write a poem on a game and I had written on the game of carrom

Today, I decided to write one more, on the board game- Snakes & Ladders. I have always believed that Snakes and Ladders is a game played to kill time, one that neither requires skill or knowledge and is simply based on luck. In fact this game for me, fell into the group of mundane activities that do not deserve any mention of.

However, I just got to know that this game is not as simple as it seems and is intricately linked to Indian history and is even linked to “karma” . The game dates back to the eighteenth century and was considered a game of life- the snakes represented the vices and the ladders represented virtues. You sin, you go down a snake. You do good, you go up the ladder. It made it’s way to England from India in 1892 and is now regarded as a world-wide classic.  In the United States, it goes by the name of Chutes and ladders. The snakes were replaced by chutes in 1943 (slides in a playground) as the snakes were received negatively by the children at the time. In India, though it continues to be a game of Snakes and Ladders.

So here goes my poem: 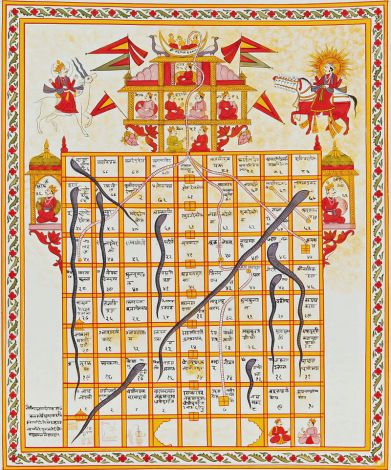 Players one to four,

No wit, no strategy,

Just based on luck.

Get a six to make a move,

If not, please wait,

Patience is a virtue.

Another throw and fortunate you,

No stops, no arduous journey,

Look down at the others,

As they march along, a step at a time.

Next throw, Oops! one, two, three,

There you go slithering and sliding down it’s tail, to 24!

Not a pretty sight from where you stand,

Everyone’s better off, you find yourself alone.

But lady luck’s not with you yet; the dice shows six,

Cross the ladder reluctantly, one step at a time, the journey long,

No short-cuts to the top, No snakes to bring you down,

If you get 1, you’ll go down again, but you mustn’t lose hope,

If you get three, you’ve won the game,

The winner is declared before your turn,

Snakes and Ladders, tougher than life,

Winner one and the game ends,

Life’s more fair, not based on luck alone,

Hard work and faith can take you through,

Forge ahead with courage till you reach the end!