Our last craft resource for you is this online collection of recordings of Borges’ lectures on poetry and many other topics. Borges was, in addition to being a poet and writer of strange and compelling short stories, an inveterate professor who lectured widely in both Spanish and English. His lectures are seeded throughout with strange factoids, fascinating observations linking the poets and poetry of different ages and languages, and an overwhelmingly omnivorous approach to knowledge.

And for our final prompt, I’d like you to take your cue from Borges, and write a poem that engages with a strange and fascinating fact. It could be an odd piece of history, an unusual bit of art trivia, or something just plain weird. While I cannot vouch for the actual accuracy of any of the facts presented at the links above (or any other facts you might use as inspiration!), I can tell you that there are definitely some poetic ideas here, just waiting for someone to use them.

My poem’s based on the Medieval Times and all that was weird then. And with this I complete 30 poems in 30 days.  Another journey with NaPoWriMo comes to an end. I thank the Organizers for being so creative with the prompts and pushing us each and every day till the last.

Once upon a time,

and Doctors were priests

Blood was produced in the liver

And a sick man was a sinner

If the teeth were sore

there was no denture

So they took it from the mouth of a dead soldier-

If the stomach was bad

Bile of a boar collected

and up the back side stuffed

Playing football was a crime, the criminal imprisoned

Strange were the ways,

During the Medieval ages

The poor took  bath in the river

While the rich in a tub filled with water,

the same used over and over

where the healthy went in, to rest

while the sick stayed at home

away from the rest

“Butt” was a unit of measurement

And couples could resolve their fights

They simply had to fight a duel

Now I could go on an on

listing all that was bizzarre during those times

and how animals could be tried for and convicted of crimes

But this should suffice for now

If you wish to check it you can

Just google up -“Weird facts or maybe strange and surprising ones

About the Medieval Times”.

For him that has quinsy [a severe throat infection]

“Take a fat cat and flay it well, clean and draw out the guts. Take the grease of a hedgehog and the fat of a bear and resins and fenugreek and sage and gum of honeysuckle and virgin wax. All this crumble small and stuff the cat within as you would a goose. Roast it all and gather the grease and anoint him [the patient] with it.” 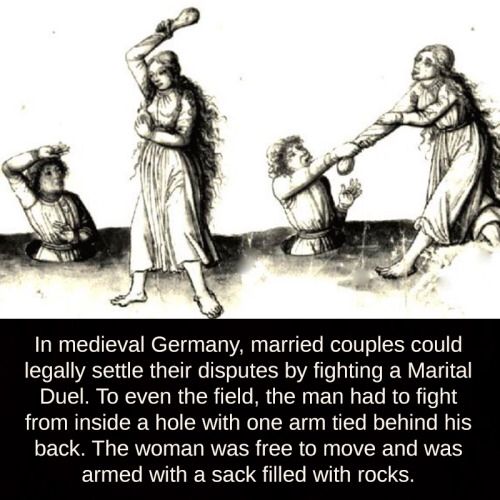 Note: pictures from the Net

Like Loading…
← NaPoWriMo 2018: Day 29 – A Response Poem- Sleeping Child to Nick and the Candlestick
→ She is a Queen