While I continue to write and share my writing with the world, I’m not sure what next?

I’m not sure where do I go from here?

I’m feeling a little swamped. Maybe more than a little.

The weather has nothing to do with how I feel. I’ve never been one to allow anything from the outside influence me. It’s purely internal – this feeling of being lost.

While I grope in the dark to find an answer, I continue to write – to clear my head.

You’re welcome to read this mumbo-jumbo but if you don’t, I understand. 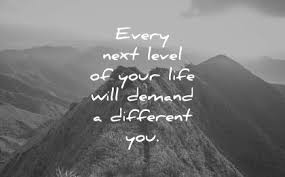 I guess the problem I’m going through is probably called the ‘retirement syndrome.’ Work’s been my yardstick to measure my worth since I finished college. Sounds lame? I know.

I hope this is just a phase and I get through it.

While I spend my hours writing and reading , I just don’t believe I’m a writer yet. It hardly feels like an occupation when one does not get paid to do it. And if I’m not a ‘writer,’ what am I now?

Does it bother me- being unable to answer this question? If I say, ‘No,’ I’d be lying. My job kind of defined who I was. It gave me a kick – made me feel useful.

Since I published a book on poetry, 2 months ago, I simply move from one day to the next, wondering, ‘What next?’. I know, it’s not the most enviable way to carry on and as bad as it sounds, it isn’t.

For truth be told, my brain’s more occupied now than when I was on a 9-5 job. That’s the bright side of the current situation. I keep wondering, ‘ what next?’ and when I’m not wondering, I’m constantly observing things or talking in my head. I’m never really lonely – I have acquired all the crazy traits of writers except the confidence.

For instance, the day-before-yesterday, as I was returning home after dropping my daughter off at school, pleasantly occupied with observing and taking pictures of the sights offered on the journey; something that one can only do in a rickshaw – you know, with it being open and no windows and doors -the rickshaw driver decided to strike a conversation.

” You can actually take the other road too to your place. Its better than this one.”

Since I hadn’t suggested the road and he had been the one who had decided to take this road, I answered, providing the reason for his decision. “But they’ve blocked the other road because it goes through a residential area.”

“Yes. But they stop rickshaws only if they are empty. If someone is there, they cannot make out. This road is full of pot-holes. That one is neat and clean and better for the tyres.”

I understood his point and would have preferred the other road too, a few months ago. And though I had not chosen the path he had taken, I was grateful for it. It offered so much more to the writer in me than the ‘neat and clean’ road that he was talking about.

A left turn from the school, after crossing the white marble Jain temple takes you through a road flanked with trees on either side and tall apartment blocks. A right turn at the end of the road and there’s a change of scene- this is the ‘not good’ road.

A rickshaw stand, 20 to 30 black and yellow tuk-tuks lie stationary, their drivers in crumpled brown uniforms, sitting around with their legs on the steering or standing around discussing politics – domestic or nation-wide; a garbage dump at the end of the line of rickshaws – trash spilling out of the green bin provided by the municipality (rather small considering the number of people living per square meter in this city), onto the roads from which crows and street-dogs take a generous helping; exactly opposite the dump is a road-side temple – with the statue of a red Hanuman (the monkey God), a few of the rickshaw-wallahs are ringing the 3 bells that hang from the small roof cover on the idol, incense sticks are burning and there’s a smell of jasmine and fermenting refuse in the area.

A little way ahead there’s a cluster of houses- four walls, a roof and a curtain for a door; washed clothes spread outside the homes on the edge of the road, for drying and few women are washing their clothes on the pavement. Its morning time and this is their life. My daughter had asked me if this constituted a slum or a chawl. I knew a chawl was a building which provided mass-housing facility – where each floor has many houses in a single row with common toilets and a verandah in the center. So this wasn’t a chawl. I wasn’t sure though if it was a slum. My idea of a slum was mud floors, shacks, tarpaulin roofs, filth, children in torn clothes, running noses, faces covered in grime, running around. While this place did have some of the ingredients, the people seemed fine; they were living their lives just like we were living ours; they had jobs; they had a home and they had dreams.

The road here is worn-out, filled with muddy water; the result of this year’s rains that have refused to abate. Across the houses, on the other side of that narrow, pot-holed road, is some more garbage; bushes grew covered in waste paper and plastic in place of flowers.

A tall building stands behind all of this – a public school. It’s holiday time for the state schools, on account of Ganesh Chathurthi (the birth of the Elephant-headed God). However, this year, the celebrations aren’t as much as the previous year. There’s not been as many processions or dancing or beating of drums and loudspeakers blasting. The prolonged rains have been a dampener. 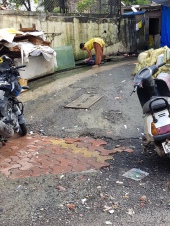 I take a few pictures through the space between the awning that’s been pulled to keep the rain out and I try being discreet. I’m not sure if taking pictures is an infringement of privacy. These days, you don’t really know what constitutes as ‘illegal.’

However, I think the driver saw me taking the pictures in the rear-view mirror because he starts another conversation on the road fines and the poor condition of the roads. It’s a conversation out of nowhere. I kind of get the feeling that he thinks I’m a journalist, a community reporter or something of the sort. I cannot blame him. Who else would take pictures of the squalor?

All I can do is mutter a “Oh” and a “Ah, that’s too much,” hoping it makes him feel better.

“And see the roads; all the pot-holes. 6 people died in these two months because of this. Where does all the money go that the authorities take?” I can’t help but agree.

I had read in the papers how frustrated civilians were of open man-holes, pot-holes, falling buildings, trees – all resulting in a loss of lives. Most of the reasons for death are avoidable and yet are repeated year after year.

The scene changes and the road broadens. A big black board says, ‘Tooth Smith’ and another green board says, ‘Munchkins – a nursery for kids.’ These are my landmarks telling me that part of town and that world has ended and now we are turning into the world that I reside in -high-rise buildings and fancy restaurants.

That’s the thing about Mumbai. You can never be unaware of the other side. It can either keep you grounded and or add a touch of arrogance that comes from knowing you belong to higher strata. And then again, you look around and see there are a million more who are much better off than you. There is a creation of divisions in the mind; something that I find more in this city than in any other. Yet there’s a buoyancy – all divisions seem happy; alive.

I am back in my neighborhood. The driver has stopped talking. I pay him the cash and thank him, not knowing what to say to him in response to the traffic fine problem that he told me about. Did I have a solution to it? Could I help in any way? What could an amateur writer do?

I wasn’t sure if he had got the reaction that he wanted, from me. Or he had just talked, in which case, I too had just listened and that was that. That’s another thing about Mumbai – you meet, you talk, you leave. There are no bonds.