I finally found a place to walk- one where I can do so all year round without worrying about the rains or traffic or pot-holes or people! This means I am closer to feeling settled. For a person who loves walking and loves nature, finding this place is as good as attaining nirvana.

Since, I have always loved walking, not being able to do so over the last one year meant I wasn’t getting to do what I loved. I just didn’t find a place that I could walk every day of my life without feeling like it was a mundane ritual.

In my quest for the ideal walking place, one that I felt one with, I ventured out of the building gates at the break of dawn. But neither the clean footpaths nor the green trees lining the roads were tempting enough to make me want to do it again. Seeing traffic on the road, a few road-side tea-stalls open for business or the street dogs curled up didn’t help. I decided it was because the street was devoid of color. It was green; there were no flowers. 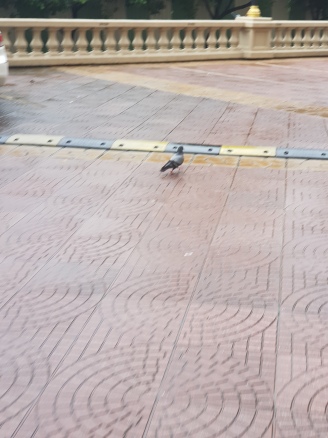 During the walk, I came upon a garden managed by the Municipality. Again, lots of green and lots of people; all there for walking.  That again did not work for me. There were just too many people on the morning walk going in circles, repeatedly, on the track.  It felt like I was playing a part in a robot race.

Whether I liked it or not, I still had to walk – for fitness sake. So, I began walking around the building. One circle is around 300 metres. Again I too was walking in circles but thankfully there weren’t people all around me. I did not have to stay on track for fear of banging into the next walker. However, it was too bland – the fixed pattern broken by a few birds swooping in to take a sip of water from a puddle made up of  ‘car-cleaning’ water or the two stray dogs that had found a foster home in our building premises and lay curled most of the time or the squirrels that lost their way and walked into the building lobby from the garden alongside.

Now you’re probably wondering why I don’t walk in the garden.

Because its’ not really the kind you can use for serious walking. It’s good for ambling. It’s like a ‘piece of the Woods;’ a few old trees cleared and a path laid around the remaining trees;that goes up and down and winds. During the rains, the path tends to get slippery with wet leaves and moss growing over it. I have always been amazed how some of the elders (seniors above the age of 70) still manage to walk here- rain or no rain. It seems precarious for ageing bones or fragile ones like mine. So, I totally avoid it for atleast 3 months of the year, during the rains. Also, at the end of the path, with no warning or barricade, there’s a patch of green which is supposed to be the dog park.

Everybody knows about it. Everybody that is except me until one day when I walked down the stone path into the so-called dog park and a young untrained boxer who I had not noticed and who the owner believed would be fine without a leash noticed me and dashed towards me in ‘leaps and bounds.’ And I froze. The owner called out his name and the boxer came to an abrupt halt- 5 cms away from me; and stared at me as I screamed for help. For the next few seconds which seemed like eternity, I stood frozen and sadly, he stood frozen too. I hoped in my heart, I looked dead to him so that he’d get disinterested and move away. But he did not budge – not until his owner called him back. That was the last time, I trespassed. The garden is more for dogs irrespective of what the board says. When I initially asked the security about ‘Pets not being allowed,’ I was told, ‘It’s a rule for pets; not for dogs!’ The message was clear. I had to recede.

The walking space I found

Anyways, after a year and two months in this place, I have finally found a place that feels right. Its funny how its’ always been here – literally right under my nose – staring at me everyday and I didn’t think much of it. This place is actually a drive that leads to two adjacent buildings. Its around 200 meters one way. And its not a circle. I need to walk down towards the gate, take a U-turn and walk back up towards the building. So it actually gives me the uphill walk too. But its’ not the exercise that it provides that makes me want to go there everyday. Its the existence of life there and yet not too much of it. It’s just perfect for me. Do I sound like Goldilocks in the house of the three bears after she finds the perfect soup and the perfect bed to sleep on? Well, I understand now how she felt. You just know when something feels right.

What’s so special about this place?

This place has color and it has a serenity-  that’s perfect for a solitary soul like me.

The walk is divided  by a line of umbrella trees into two roads – one for exiting the building premises and the other for entering the premises. When you’re exiting, the line of trees is on your left hand side and the underground parking opens up on the right hand side followed by the pump-room and a stone wall that also serves as a place to halt for the coconut-sellers and as a drop-off point for the domestic help. Beyond this point, at an elevation there are a few chairs or benches (I cannot see them from where I walk). I know they exist because I see the torsos of a group of 5 or 6 old ladies as they gather around every morning to sing hymns.

When you take a U-turn and walk up the slope to enter the premises, the line of trees is on your right-hand side and on the left is an empty land, overgrown with trees, shrubs, grass and climbers. In the center of the land is an unfinished two-storey building. It’s deserted and has been left incomplete since the apartment owners in the buildings alongside complained that it blocked the view of the garden and the lake – that they were originally promised when the apartment was sold to them. The court decided in favor of the house owners and the building developer simply had to stop constructing the building. It remains in waiting. 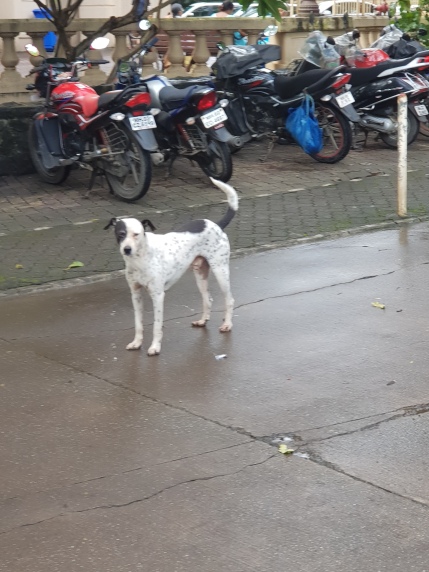 With trees on one side, overgrown green on the other and traffic limited to a few cars exiting the premises or domestic help coming in to work at the time of the day when I walk there, it makes for the perfect walking place. It offers me something new everyday, enticing me to continue my walking. I even have constant company here – in the form of ‘Spotty.’ That’s what I call him. I think it’s his land because he’s always there and thankfully my walking there doesn’t bother him because he gives me a look and then turns away, disinterested.

The first time I walked there, two weeks’ ago, I found shades of purple – flowers that grow as creepers on the metal mesh that had been put up to separate the drive from the empty land on the other side. 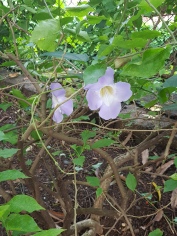 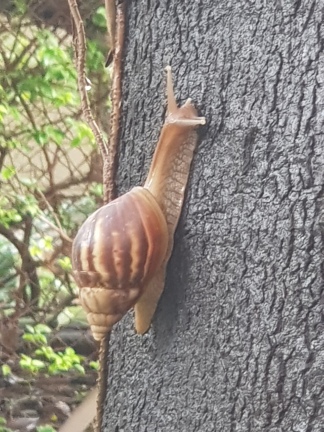 The next day, I saw these exquisite creatures that moved like they had all the time in the world. They were there on the trees and on the lamp-posts. I think they prefer smoother surfaces. It probably makes moving a little more easier – considering they need to move around carrying their home on the top of them.

Then another day, I noticed several dragonflies on the side where the creepers grow. That was the day the sun had come out after a long time- after the rains that seemed to go on forever. I could see was their gossamer wings shimmering in the sun-rays. I had to squint my eyes to confirm their existence. For a person bred in the city and that too in a desert, these experiences are new – each season bringing with it new creatures or maybe it’s these creatures that herald the seasons’ arrival.

On days, when these signs of life are in slumber, the trees growing here offer enough to imagination –  some growing on others – their roots holding on for dear life and others with branches that spread out making strange shapes.

This place is wild and yet its’ not. Ever since I’ve found it, I’ve resumed walking on a daily basis. Hopefully that means I can now shed some of the baggage that I’ve been carrying around my midriff. And I suppose this means I’m closer now to ‘feeling at home’ here.

Do you enjoy walking or do you walk for exercise. If you enjoy it, do you have a special walking place or does the tread mill work for you? Share your walking place in the comments below. Would love to know.