The smells that once excited me had no effect; now that I knew this was where I was going to be staying, for sometime at-least.

“Ma, we’re home. That peculiar smell…a concoction of burning firewood, soil after the rains…is so Kerala,” my younger one quipped. She was so excited as I was used to being in the past, when I visited God’s own country (as the southern Indian state is nicknamed); on holidays. I feigned delight and couldn’t help feeling both guilty and angry at myself for the lack of enthusiasm.

“Why were my senses not reacting in the way they were habituated to? I wasn’t trying to be difficult. On the contrary, I so wanted to make this move work.”

Getting out of the airport and into the car, the sight of the lush green foliage which is so characteristic of Kerala and so far away from the world that I was coming from, the railway crossing with the wooden fence, the meandering river, the bridge passed by me like a mundane occurring.

It was around 5p.m. It wasn’t dark. It would take an hour to reach home. And while otherwise, I cannot help turning my head left and right in an attempt not to lose out on any of changes that may have occurred since my last visit here; I now just closed my eyes. While my heart failed to be moved by the natural beauty of my surroundings, I was tired of trying too hard to feel the love for the place again.

As the evening gave way to dusk, the car turned into the narrow lane that led home. Open fields filled with water from the rains and tall coconut trees loomed over. Flowering plants grew wild over the compound walls of homes and brushed against the glass windows of the car. Funnily they always made us duck inside the car ( as though if we didn’t, we’d get scratched by the protruding branches).

On the right side was the village temple lit up… yellow lights of the oil lamps lined the walls of the temple. From the window, I could see the temple doors lit up with white lights, a sight so beautiful that my now unfeeling heart began to beat slowly; not frantically with excitement. I couldn’t imagine how even the sight of the temple which otherwise had the power to evoke a multitude of emotions in me, had not moved me this time, not as much. Maybe it was the exhaustion of the past year with managing on my own, the exams, the packing, the travelling and all the chaos that involves moving countries or like many of you’ll who read my earlier post, suggested, maybe it was plain “anguish.” I’m not sure.

The wrought iron gates were open, awaiting the guests to arrive. The car swung in past the mango tree and came to a halt in the driveway in front of the pink and red family home. The children’s grand-parents and their cousin were there on the porch; warm, loving eyes and a wide smile.

“Welcome to India,” my father-in-law’s voice rang clear and had the effect of clearing my head, at-least for a while.

“We were home and that’s all that mattered for now. I’ll cross the bridge when I come to it. For now, I was on holiday…” 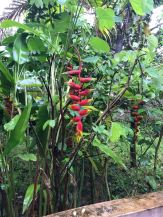 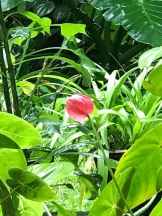 8 responses to “Return to the Homeland – India Diaries – Part1”