Its India’s 71st Independence Day and our first in the country.  As expected there is a lot of excitement at home as both the girls wake up in the morning to don the Indian attire white salwar kameez, complete with jhumkas, bindis and bangles for the Independence Day celebrations at school.  Outside on the streets, shops, apartment buildings have been decorated with flags and balloons in the colors of the flag – orange, white and green. The loudspeakers are blaring with patriotic songs. There is an air of festivity, a sense of pride in being Indian that cuts across all people irrespective of religion or status in society. And the euphoria surrounding the celebration of freedom has percolated into our home with the monsoon breeze. There is a buzz of activity in the house in the early hours of the morning.

For years, I had tried instilling a sense of patriotism in the children and as the seed was sown in foreign soil, its bloom lacked the fragrance; the “Indianness” in it… like an Indian curry made in Europe perhaps. I wished so much that the girls’ would feel how I felt on listening to the National Anthem or on seeing the Indian Flag unfurl.

Their love for the country hereto were limited to the stories that I and their dad or grand-parents shared with them of childhood days spent in the country and as we repeated them we ardently hoped that the roots had been preserved. Any doubt that crept in our mind, we’d push aside and avoid thinking of. Those stories were entertaining until an age and did the job of bed-time stories while keeping the connect with the country. However, as the girls’ grew, those stories, remained just that – stories! Stories which over time lacked luster and lost their appeal and faiths were open to doubt by questioning, curious minds.

However, over the last 2 weeks as I watched them practice their dance steps in a room, one on the right and the other on the left to different patriotic songs, I could see the germination of the seeds that I had sown a long time ago. The roots had broken through the seed and were taking hold. It was visible in their eyes, in their whole-hearted attempts to speak Hindi and in the new additions to their vocabulary like “Chudis” for chudidar (the leggings worn under the Indian Kurta) or “Jhumka” (earrings with a drop like a bell) , “pakka” (means absolutely) and ‘Teek Hai‘ (which means its fine). They had started speaking ‘Hinglish’. And I’m not complaining.  In fact its great seeing they’re trying to fit in, to be who they are- Indians!  India has rubbed off on them in a month. They’ve taken to the country, like a duck takes to water despite my initial apprehensions. As if to confirm my faith, the older one said, “Do you know we are dedicating the function to our soldiers who against all odds carry on their job of protecting us so that we can continue to be free?” 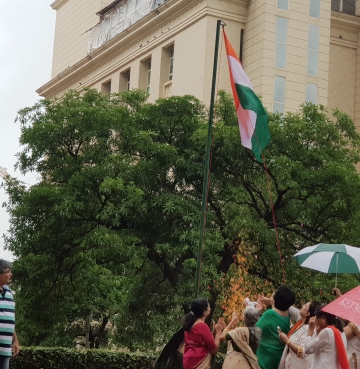 The Independence Day celebrations involved flag hoisting by the senior citizens of the building. The flag was unfurled and there was a shower of orange flowers and everybody there, old and young stood to attention and sang the national anthem; unhindered by the rains which had slowed down, as if to allow the flag to be hoisted. This was followed by a medley of patriotic songs sung by some talented residents and then it was wrapped up with a sumptuous breakfast.

It provided me an opportunity  to meet the other residents in the building. When I stepped down to attend the celebration, I was alone(the children having gone to school and the husband having gone on an office trip); a stranger. By the end of the celebrations, I had been introduced to most people who were there, I had people introduced to me, I had become part of the building whats app group (social media can be so helpful at times) and had been invited by at-least 3 residents for a tete- a- tete at the most convenient time.

Mumbaikars (as people from Mumbai are called)

I know its going to sound strange when I say this but Mumbaikars are different. Honestly they are. No exaggeration here. For one, they are are a lot more friendlier here than people in other places. They are easier to talk to. They are totally ready to share information and they are helpful. It could be because the city is a commercial hub and most people here have come to the city from either elsewhere in India or abroad and were in the same place that you’re standing in now. They’ve had their teething issues too but rather than being indifferent to others, they are ready to share the information. That’s the common binding thread that forms the beginning of a conversation here. First, “Where have you come from?” and then “Do you work?”. If you do then then the next question is “Where do you work?” and if you don’t then its ” Do you have kids? Which school do your kids go to?”.  When answering these questions, if you happen to wander off to other subjects quite naturally or feel a connect with the manner in which the answers are given (boring, witty, smart or entertaining) then a bond is formed and an offer is made to meet over a cup of coffee at the neighborhood cafe’ which is probably just across the road in front of your building. For those with no kids there are umpteen number of subjects that people can bond over. It could simply be over the upcoming marathon or the building gym trainer or the senior citizen club in the building or the newly formed group to help reduce the usage of plastic in the building or over an upcoming anthology. As of now, its enough to say that at-least Mumbaikars take the first step and talk, even if its small talk. That’s nice of them. And its very different from the world that I’ve grown in. And while I may not be accustomed to the Mumbai culture, it’s not bad. I do know the world wouldn’t be a fun place if all people were like me, totally comfortable with being on their own . I can vouch for that. Sometimes some amount of superficial talk may actually lead to a more meaningful relation over a period of time. If not, I guess its fine for a ‘time-pass’, as they say it in India 🙂

As if the Independence Day wasn’t enough celebration, we went to the temple once the children were back because it was Nag Panchami. It’s the traditional worship of snakes by Hindus all over India, Nepal and other places that Hindu adherents live in. This is the definition as per Wikipedia. I don’t have a better explanation but it’s something we believe in very strongly.  And looking at the crowds at the temple it was obvious that a lot of people believe in this kind of worship. Crowds thronged the temple and there was barely any place to move and yet we did move forward, around, rang the temple bells, saw the images of Naga deities worshiped in milk. No, the milk wasn’t wasted. It was being collected in a big cauldron in front of the deity. I’m not sure how it was to be recycled but that was definitely the purpose. There were a lot of police in the premises to control the crowds and there was a lot of smoke around because of the camphor being burnt as part of the worship.Then to the sound of the chenda and mridangam (belongs to the drum family), pungi (something like a flute), the deity was carried over the head over a person who was possessed by a spirit. Again, I’ll write about this in some future post. The experience was unique, one of a kind. It wasn’t pleasant considering the crowds, the wet muddy floors because of the rains, the smoke that made the eyes burn and yet the discipline was amazing. There was no pushing or shoving and people simply followed queues in complete faith despite the discomfort. That is the beauty of faith which the girls’ did not appreciate today. However I’m sure they will one day just like they’ve understood the value of our Independence day today.

Happy Independence Day to all my Indian Readers. Please think and pray for our soldiers today and everyday for this freedom that we got 71 years ago has been maintained only because of the sacrifices made by them. The least we can do is maintain peace amongst ourselves as they protect us from our external enemies. That would be the apt way to show our gratitude to them and our love for the country. That would be true patriotism.